The Ellipsiad was set up when I became willing to wave my words about in public. Since then, I've worked at developing my performance skills (something I very much enjoy) alongside other creative endeavours, all of which has become somewhat admni-heavy and hard to follow. Therefore, I've decided to put all my creative endeavours in one place and have produced a new website covering my art, craft and words. So, please do head over there to have a look. There will be no new posts on the Ellipsiad, but it will remain as an archive of what I've posted up to this point. Thanks and see you over on Wordpress!
Posted by davesbrain at 12:24 No comments:

Political and media rhetoric bleed into society, creating at atmosphere where it's OK to openly hate, first on the basis of race and religion, but it spreads as the haters feel increasingly confident... This happened yesterday.

I hear shouts out in the street –
not the boisterous hollering
of schoolkids just released or hormoned teens,
but an altogether uglier “oi, come ‘ere”,
“leave me alone, go away”,
“wot the fuck did you say?”
So my ears prick, I look and see four against one –
the one, a middle-aged man,
a transvestite (yes, in broad daylight!),
skirt and leggings, not a dress –
it’s winter, what do you expect?
The four look like a walking stereotype –
trackies, trainers, crap tatts
and though I try hard not to judge beyond behaviour,
it’s not easy – they’re twenty-something,
way beyond the playground
and still hunting for someone to bully,
their victim’s difference used to excuse
the urge to deliver a kicking.
For a moment I thought about not getting involved,
it was the first time I’d witnessed transphobia first hand,
but I’d heard the stories, none with happy endings
and so I chose to intervene.
By now the four have chased the one
into a local shop where the owners,
a quiet, friendly couple, hide behind the counter,
shocked by the black-hot bile.
I push through to where he’s cornered
and stand doorman-style between parasites and prey,
tell the hate-quartet they’ll have to leave
and won’t be hitting anyone today.
They try to have a go, yell about what he called them,
like that’s the way round it happened,
rant about what he wears,
some rabid shite like ‘it shames real women’,
though through the shower of spit-thick vowels,
I cannot work out how,
nor what makes him dirty, pervy,
worthy of their spite.
I give them my best ‘whatever’ face,
reiterate I will not let them translate hate to hurt,
though I can’t retract their words, and we all know
the sticks-and-stones rhyme doesn’t really work.
The alpha-bigot thinks about bunching a fist
and taking a swing,
meets my gaze, thinks again –
they monkey-walk away,
leaving insults and finger-flips as litter in their wake,
and once across the road, they run.
The one tells the police ‘no need to come’,
nothing to report, to him it’s just an ordinary day.
Posted by davesbrain at 14:19 2 comments:

A tour of the exhibition


I spent the last week as one of the artists at a community-based arts festival organised by this fine new local organisation, the Southampton Chamber of Arts - here's a tour of the work on display...

Deep in the heart of heritage

Chain-heavy, iron cobra’s caught mid-strike,
Halloween-themed stove spits sparks
from once-discarded engine-parts
and the shepherds’ skull and trident flies
above a split black cat, LED-red-eyed,
cyborg skeleton inside,
guards a charred-black infant, never cried,
dustbin perch, peeled-back hide,
while sharks chit-chat with flamingos
gold-chain style, watercoloured curves
beckon me and sigh, lick fingertips,
turn their faces coyly to one side
to bat their lids at stained-glass poppies,
portraits, skies and symbols back-lit
as the rare cog-headed butterfly
alights upon the pulpit and the chop-shop motorbikes.
Across the aisle, oblongs shine out at me –
images of Tuscan countryside
boardwalk shadows, misted seas,
sunsets, sunrises, winter trees,
way-back-when St. Denys scenes,
and happiness is boxed
by a smirking purple dame,
turquoise feathered hat on top,
looks knowing at a Merlin motor in a frame
and the seasons’ turning burns like flame,
a lyrebird sings angelic strains,
strings strummed and humming on church columns,
piano hammers hung on silent springs
awaken tigers, lilypads and poison frogs,
happy ‘see my bits’ blue dog,
layered skull and octopus,
half-a-Dalek, Ganesh dances,
Hanuman makes mischief on a plinth
and a plus-size waxwork hand
with giant whorls and arches
reaches out to teach us –
what might come of this?
Nothing’s ever lost by asking. 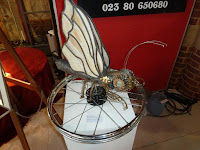 Posted by davesbrain at 10:27 No comments:

Origins are not the only fruit

Here's the first-ish version of a poem that came out of Apples & Snakes/Adam Kammerling's fine Origins poetry workshop as part of Fareham Arts Festival. It'll probably get edited n times before I'm happy with it, or maybe not - who knows - and may even end up as part of the long 'Stingboy' piece I'm (still) writing - but it came from an exercise looking at listing places we've lived, things we've said, music that was formative and so on, with the aim of incorporating them into a poem. Hope you like it.

I was born into a house of golliwogs,
spike-eyed toys,
soaps and sitcoms,
of throwaway laughs at 'Pakis', 'Micks' and 'nig-nogs',
of being dangled by one bony wrist,
a skinny meat piñata
hearing the repeated line
“if you won’t respect me,
at least you’ll fear me”,
a self-fulfilling prophecy,
all an inadequate man could offer me
bar processed pap
and welder’s-callus slaps,
driving home the message that
I wouldn’t like that foreign crap,
those raucous songs,
and anything beyond the grey-and-beige
is wrong, looks like trouble,
but doubled-up one school night,
snuck out to taste the flavour
of Iron Maiden,
so much sweeter than copper on the tongue,
a lonely lad’s first gig
well worth the late-back round of Dodgefist.

Fast-forwarding from ruddy rage,
riffling halfway through biro movies,
corner-paged,
I’m in Nai’posha, the Maasai’s cattle waterhole,
named for rough waters, ‘that which ebbs and flows’,
sun-drained then quenched
with rains and silty seasoning,
and it’s my inauguration by means
of shield and spear and knobkerrie,
story-telling,

quaffing nailang'a,
blood-and-milk straight from the gourd,
now I am a tribal brother,
clansman,
witness to the intimate cutting of others.

I was recently interviewed for ASLI (Art Saves Lives International) which is an organisation aiming to tackle mental health issues and stigma through creative expression. The interview about depression and childhood physical abuse is published here and includes my poem 'Stingboy'.
Posted by davesbrain at 10:51 No comments:

You can buy my book 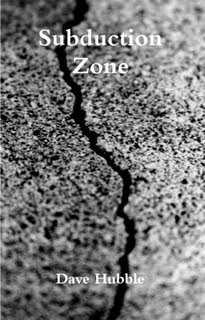 Where most readers have been